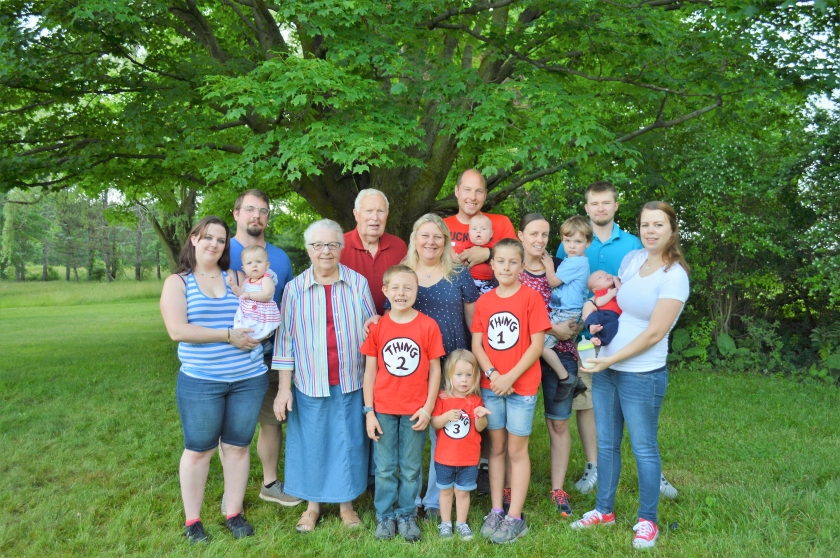 When Chipmunk was born the US Navy awarded me with 14 days of free leave. However, with Heather’s mom in town and the support of our church, I did not feel the need to take leave immediately after Chipmunk’s birth. We had meals being delivered to us and an extra set of hands to care for the other kids. Instead, I decided to save my leave and use it for a trip back to visit friends and family in Ohio after Chipmunk was old enough to really travel.

We decided to make the trip in June, so the weather would be nice during our visit. This would make Chipmunk 4 months old. While he would still need stops to eat and have his diaper changed, this would be much easier than when he was younger.

We packed the van and were ready to go the night before leaving, which we did for a number of reasons. One of these reasons was that I worked the night before we left. Luckily for me, the flow of patients was not horrible and I was able to head home early, which allowed us to pull out of the campground right at 2:00 am Sunday morning instead of around 7:00 am if I had worked my entire shift. We were officially in for the long haul! The kids were excited to be on the road and were very energetic, but after we made it out onto the freeway they all went back to sleep until after daybreak. It was a little over 2,200 miles from California to Ohio. We were prepared with snacks, activities, and 5 gallons of drinking water.

We settled into a routine when we would make stops along the way. I would fill the van with fuel and wash the bug cemetery off the windshield. Heather would tend to Chipmunk. Pie would help with Miss Kicky Feet, and Bug would potty the dog and refill Dixie’s water bowl. This kept our stops short as possible to reduce any unnecessary additional time being added to the trip. Our system must have worked, as we pulled into the driveway in Ohio at 5:30pm Monday. When you account for the 3-hour time zone difference, this put us right about 36 hours for the whole trip including stops.

We were asked by some why we didn’t fly to Ohio. The first was simply cost. We would have needed 5 round-trip tickets, and once we arrived we would not have a vehicle, so we would most likely need a rental car. Comparing this cost to the fuel expense to drive the van to Ohio and back, the choice was clear. We also were planning (and did) bring back a 30-gallon cooler of frozen beef. I don’t think the airlines could have accommodated that.

The next two weeks seemed to fly by as we relaxed, visited with family and special friends, and enjoyed watching our kids play with their cousins. Each of Heather’s sisters had given birth to a new baby that we had not actually met yet, so it was nice to seeing the babies in person instead of just pictures. Additionally, none of the extended family had ever met Chipmunk either, so all three new babies got passed around quite a bit.

While I have been away from the Fire Department for a few years now, our visit to Ohio coincided with Chief Henry’s retirement from STFD, the second department I was on while in Ohio. It was great to see my coworkers again and catch up with what was going on around the department. I am very happy with my current occupation and location, however I am truly thankful for the time I got to spend on the department.

Since I was thinking about the Fire Department I opted to make a visit to the Mansfield Fire Museum, a small museum that I had heard about but had not made it a point to visit while actually living in Ohio. Miss Kicky Feet came along with me and she enjoyed seeing all the retired trucks and equipment. She even got to try on some junior-sized fire gear.

I think we each gained about 10 pounds while we were in Ohio thanks to “Grandma cooking”. Make no mistake, the feasting was glorious! It was like a full-fledged family reunion at each night’s dinner. I even got to enjoy my favorite homemade pie, Apple Rhubarb.

I was promised by Heather’s mom that during this trip I would not have to take on any home improvement projects like the prior visit when I ripped up and re-tiled the bathroom floor. While she did not ask me to do any projects, I did do a few little jobs like moving the Wifi router, changing the bathtub spigot, chainsawing 2 trees, and adding a vent valve under the kitchen sink to name a few. I also hopped on the zero-turn lawnmower, although I’m not sure if that really qualifies as work or play. For reference, it had been 5 years since I last mowed a yard.

Once our two weeks had come to an end, we loaded up the van and headed back West. This time the anticipation and excitement were not the same, and we knew exactly what we were in for over the next 36 hours. That made the return trip seem longer than the trip heading East. We also started out first thing in the morning, which means the kids did not sleep the first few hours like on the way to Ohio. Regardless, we made good time and pulled back into the California campground around dinner time the next day, approximately 36 hours after leaving Ohio.

It was great to see our family and some special friends during this trip. As we pulled out, we were not sure when the next time we would be back in Ohio so the hugs were long and there were even a few tears shed.