San Angelo Texas in February is nice. Our first morning (after arriving late in the night and backing the RV into our spot in the dark) I emerged into a beautiful sunny morning where we were perplexed by the campground employees who were all wearing coats when we were walking around in t-shirts. That should have been my first clue as to how terribly hot it would be in just a couple of months. 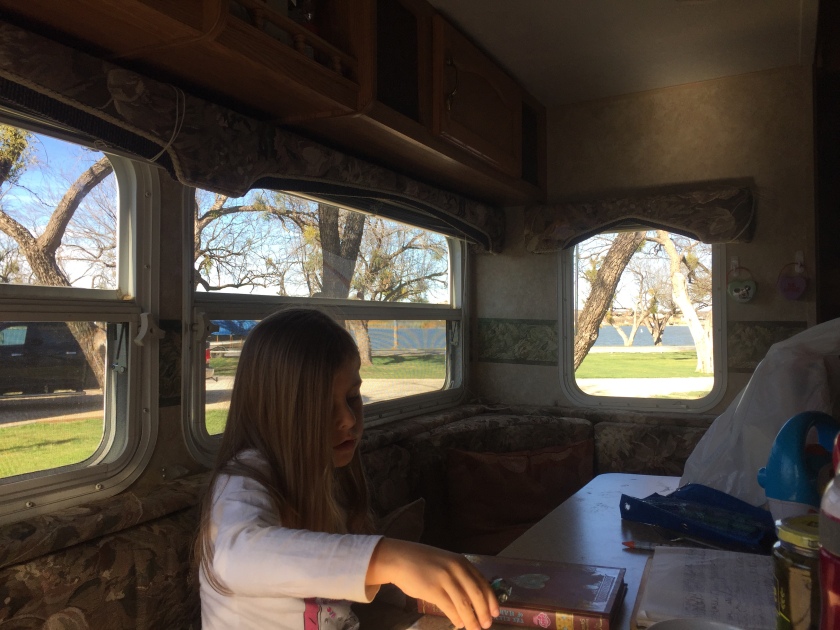 Our campground was next to a lake that sparkled in the sun but I was just wondering which child would be first to fall in. As we went on a walk later that day our dog was scared to go out on the docks, so I was working with her, enticing her out onto the dock so she could see that there was nothing to be scared of. That is when I walked backwards right off the end of one of the docks and straight into the lake. I was only in the water for a couple of seconds before I pulled myself back up onto the dock to an excited chorus from my children of “mommy, can we go swimming too?!?!” Haha! As it turns out, I was the first child to fall into the lake.

This was a nice campground that I really liked. I mean, nothing is perfect. The laundry room wasn’t the cleanest and there was not a pool, but the lake was pretty and it had just the right amount of trees and plenty of grass and was mostly empty and peaceful. It was also within a city park with lots of green space and a few small playgrounds. Then I noticed a puddle in the grass right in front of our RV, and as the day went on the puddle grew, and then another puddle appeared right next to our neighbor’s septic pipe. Right about then Kevin was getting home so I pointed the puddle out to him and he pointed it out to the campground manager who immediately went and flushed the pipes to remove a clog and it was all fixed. Whew. But a couple of days later that tiny little puddle appeared right next to our RV again, right on the front side, close to where we had the kids’ outside toys stashed. Again by afternoon there was a bigger puddle near our neighbor’s septic pipe and again the management had the lines flushed.

On a side tangent, We usually leave our grey water tank valve open and our black tank valve closed. When our campground’s managers flushed the underground sewer lines they also went around and closed people’s tank valves. That was thoughtful so we don’t get something nasty coming back up where it should not be. Very nice, but, they did not tell us that they closed the valves and they also did not open them back up once they were done. So the next morning I woke up to my children loudly saying “Ew, what is this big puddle? Why are my feet all wet? Did Dixie pee on the floor?”  This was very much NOT how I wanted to wake up. As it turned out the dog had not peed on the floor. Both sides of the kitchen sink were absolutely full of water and it was over flowing onto the counter top and running down under the cabinets and out onto the floor where my children were stepping in it!!! Where was all of this water coming from you may ask. I had not been running any water into the sink from the faucet but I knew where the water was coming from. This had actually happened just a week before in Daytona Beach when we had been almost ready to pull out and had disconnected from the sewer system but not yet disconnected from fresh water. Under our sink we have a reverse osmosis water filter to filter water for drinking. It filters pretty slowly and has a one gallon tank of already filtered water that is ready for use, but as it filters water it takes several gallons of tap water to make a gallon of filtered water. This is due to back-flushing of the membrane in the RO system, which is normal. Those several gallons of water are put directly into the drain under the sink which then filled up the galley tank, and the sink, and the counter, and the floor… you get the picture. At least it wasn’t gross water. Not fun to clean up though.

Back to the septic problems. A few days later, I remember it was a Saturday because it was busier than normal. I was baking cookies. That tiny little puddle appeared again next to our RV. Not again! Not long after I went out and there was a full blown explosion. Next to our neighbor’s septic pipe was a lake of, well, I refused to look too closely but it smelled bad. The manager blamed the neighbor for flushing shop towels down his toilet and the neighbor blamed the manager for failing to fix an allegedly broken pipe and they and the maintenance crew all stood around the lake arguing while I hid inside, thankful that I had baked cookies that day because they smelled heavenly. Soon I saw them digging and they dug up the pipe. The kids were super excited. They wanted to dig too! and play in the septic-infused mud! and climb in and out of the hole! “no.” They determined that a tree root caused the underground pipe to have an uphill slant to it between the neighbor’s site and ours. This problem was made worse by the fact that our neighbor lived in a left over FEMA trailer from Katrina. This is a problem because the FEMA trailers were made as cheap as possible…meaning no black tank underneath them. When the neighbor flushed his toilet everything went straight out the pipe, no time to break down paper or waste to a more, uh, liquid form. You also lose the force of a 30 gallon tank emptying to push things on down the line, like what occurs when we dump our black tank. Then, for the next week it poured every day and we had a huge smelly mess in front of our camper. 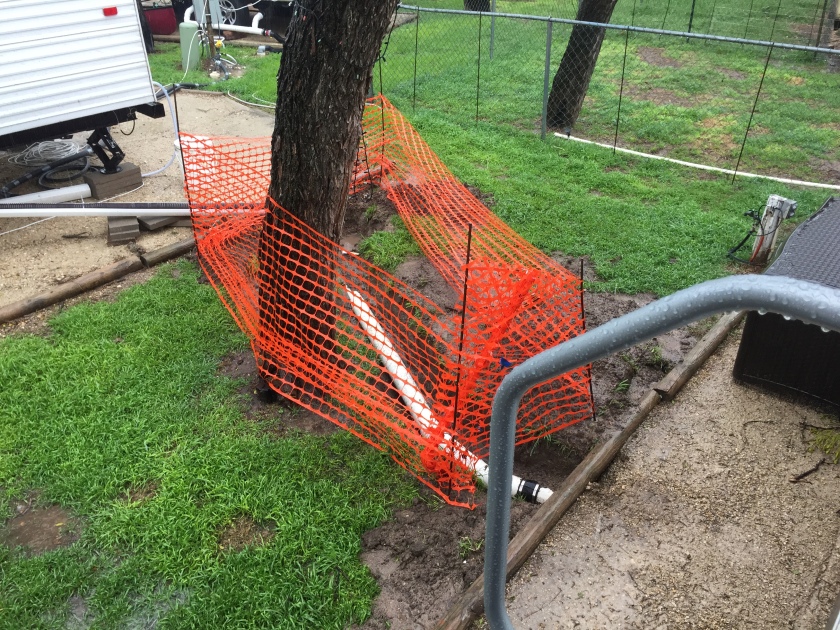 That was our breaking point. That is when we asked to leave and received a refund for the other half of our first month. We appreciated them handling it so well and letting us out so easily. So, we hitched up the fifth wheel and moved to the San Angelo KOA a few miles up the road. The ironic thing about the whole situation is that the KOA was closer to the hospital, cheaper, and had a nice outdoor pool. We did lose the lake and grassy areas, but I will take pea gravel over sewage any day of the week.