Before we leave Texas for the season we were highly encouraged to visit Big Bend National Park. We did some research, found a string of days in which to make the trip, and started planning. We even borrowed some materials from one of the doctors at the hospital at which Kevin works. The good doctor made some recommendations of trails he thought we and the kids would enjoy and gave us hiking sticks that his (now grown) kids had used at the park.

We hitched up our residence-on-wheels and were off across the oil fields to the entrance of the park. As we rolled across I-10 the truck started to develop a fairly persistent squeal, which I thought I had better check when we topped off the bulk diesel tank in the bed of the truck before leaving the interstate. I was not so happy to find a much larger hole in the center of one of the idler pulleys than I was expecting. I quickly found the nearest Napa parts store and gently drove the truck and trailer the few blocks to the store. It took about an hour, including a trip by the Napa staff to another parts store in town for me, but I was soon on the road again squeal-free. A near-miss that could have caused major problems in the middle of Big Bend.

We arrived at the gate, took some pictures, then continued the 50 additional miles from the gate to the Rio Grande Village campground on the east side of the park along the US-Mexican border. We chuckled at the thought that Big Bend is actually larger than the state of Rhode Island, the state we had explored last summer as I worked at a hospital up there. We pulled into the campground shortly before dusk and got the RV set up for a peaceful night of sleep without the glare of security lights or city traffic.

The next morning, with 5 passports in hand, we headed for the border crossing. We were greeted by US Border patrol and given some basic info about the border and village within Mexico we were about to visit. Once across the border, we took a row boat ride across the Rio Grande, although we probably could have waded across the river in a few spots without getting our shorts wet. We were offered a truck or donkey ride into town, but we opted to walk the half mile into the village of Boquillas del Carmen. We had a self-appointed tour guide that led us to the Mexican customs office, which was inside a metal trailer next to about 6 rows of solar panels. This was the only place in the village that had air conditioning, which I realized was the reason for the number of solar panels. The village did have some electricity, but the reliability of such service may be questionable based on the number of solar panels we saw throughout the village. Even the street lights had solar panels on top of them to keep them running. After getting our passports stamped we were free to explore the village, with the help of our self-appointed guide of course. He explained that the village was home to about 140 people, had 2 school teachers for all 9 grades (note only 9 grades vs. 12 grades in the United States), and the hospital/clinic was open 25 days a month. There was 1 ambulance to transport patients to the next closest village on the remaining days of the month or if patient acuity necessitated transport. The next village was a mere 160 miles away, so I hope it’s not urgent. On a side note, the entire hospital ran off a single 30 amp breaker. This is in stark contrast to our power-hungry hospitals in the U.S. Heather says this is also probably in stark contrast to what they can save you from. We also had a small lunch at the local restaurant. The children were quite interested in a sink at the restaurant that drained into a flower bed.

That afternoon, after crossing back into the U.S., we headed back to the RV to check on our dog, Dixie, to ensure she was doing ok in the heat of the southern Texas sun. It was still decently cool inside the RV but we decided to start up the generator to run the air conditioner and charge the RV battery while we had lunch. After about 20 minutes of fighting with the generator it was determined that the inverter in the generator had failed and the only voltage we were going to get from it was 12 volts. This meant that we had a problem. We have a deep freezer in the RV, and while we were not exactly sure how long the freezer would last in the 100 degree heat with the contents still frozen, we were pretty certain that 5 days was not it. We were already about 30 hours without electric to the freezer. We were now faced with basically 2 options. We could either acquire a spot in the RV lot in the Rio Grande Village that had full hook-ups, or we would have to pull out early whenever the freezer contents started to thaw. We were very happy to find the RV lot had 1 open spot, so we took it! Now that our electric crisis had been solved, we were headed back out on the trails. Even the popsicles were still frozen and Dixie got to bask in the air conditioning.

Our full photo album from our trip to Big Bend can be found here: Big Bend Photo Album

On that first day we also visited a nearby Ranger station where they informed us about the Jr. Ranger Program. Bug and Pie each got an activity book and could complete a certain number of activities (depending on age) to receive a Jr. Ranger Badge. We love the Jr. Ranger Program! We all learned so much and it kept the kids engaged.

There is SO MUCH to see at Big Bend. We barely scratched the surface while we were there. There are so so many trails I want to go back and hike. Also, it would be nice to be in a bit better shape before going back. Kevin has been running daily which does well to prepare him for hiking but I have been doing things more like dishes and laundry and cooking and schooling the children and taking care of the baby. None of these things helped to prepare me for long hikes and I was quite exhausted by the end of this trip (and the middle and beginning too, haha).

Shortly before sunset on that first day we hiked to Boquillas Canyon which was beautiful. We saw a road runner and had fun exploring and the kids got to slide down a sand slide and play in a shallow portion of the river. We thought it was interesting that many of the trails that are closer to the border have things for sale: It would appear that someone had crossed the river, set up a nice pile of rocks with wares for sale and some hiking sticks (super light made out of Sotol, a desert plant) and a plastic container to collect money.  Yep. We thought that was interesting. 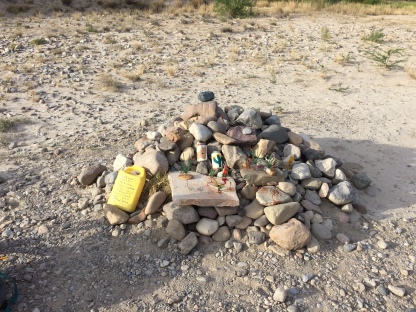 On the second day we hiked the Lost Mine Trail. It was hard work. We started out pretty high up and just kept climbing. The big kids were pretty whiny. I was keeping my whine on the inside and little miss kicky feet was sound asleep against my chest. After passing some signs about bears and cougars I was also a bit nervous. Trying to keep the kiddos within arms reach to keep them from being cougar lunch kept me going at a much quicker pace than I may otherwise have been able to attain.

When we finally got to the top of this trail (2.4 miles later) and stopped and saw the view we all agreed that the hard climb had been well worth it. And thankfully we never saw any signs of bears or mountain lions (on this trail).

Over the rest of our time here we experienced the night sky undiminished by light pollution, played in the hot springs, hiked and climbed numerous other small trails, visited all of the Ranger Stations, spent many hours driving through the park, spent much time wishing we could have come for two weeks instead of 3 days (and maybe at a slightly earlier time in the year because it was HOT). We saw beautiful sunsets and ate at the local restaurant. We learned a lot about the climates of Big Bend and the wildlife including javelinas who are not pigs but look similar and eat prickly pear cactus. We saw a bear and jack rabbits and a road runner and many other bird species.

Right before we left the kids got their Jr. Ranger badges and each got a patch for the completion of a certain trail and then we were off, headed back to our current home. On the way home we had to stop and change a tire which we have become pretty efficient at. The trip was otherwise uneventful.