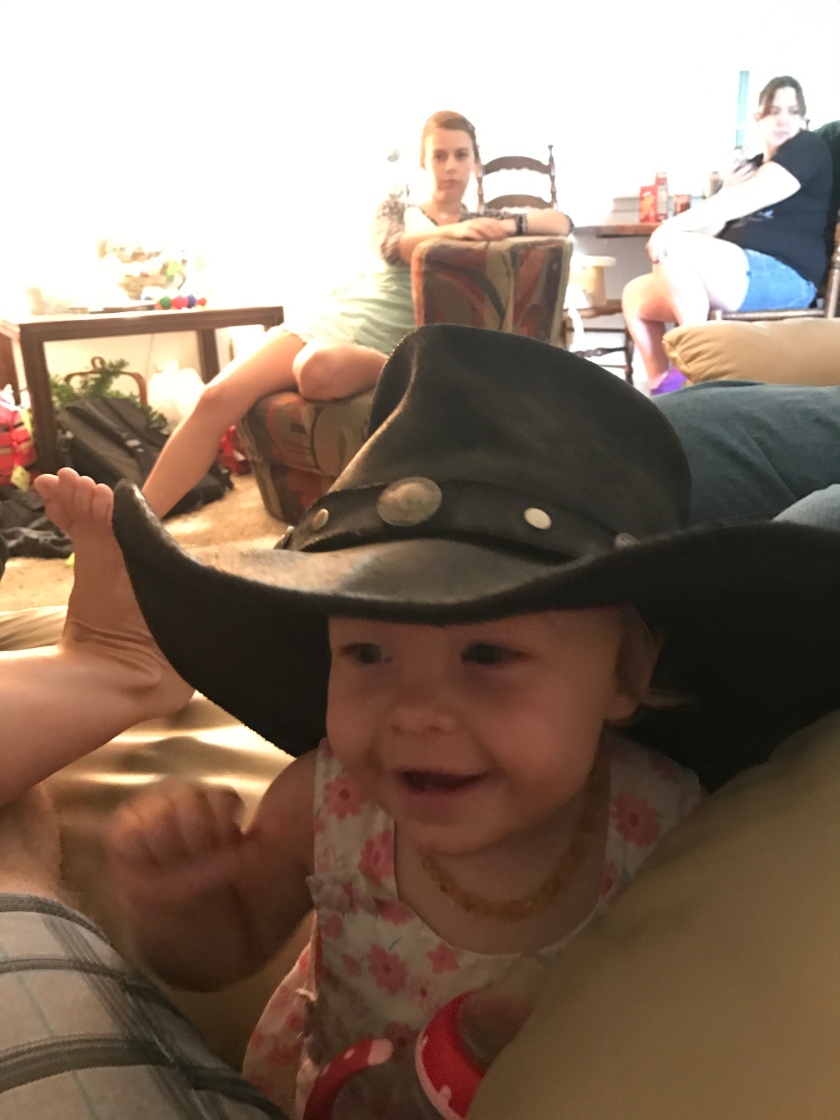 While still in Springfield, MO the extended family came for a visit. This included Heather’s two sisters, mother, and all 3 of her grandparents. Extended family from Kansas and Minnesota were present as well. We had quite a gathering, which of course would not all fit inside our fifth wheel RV. Instead of getting multiple hotel rooms, we decided to rent a 3-bedroom house through AirBnB, which was a wonderful choice, and was much less expensive for the number of people we had there. We did float back and forth between our campground and the house to enjoy the campground swimming pool and sleep, but the majority of our time was spent at the AirBnB house.

Everyone came for a visit and to help celebrated Miss Kicky Feet’s first birthday, and Bug’s early birthday as well as Kevin and Heather’s recently-belated birthday. While in town we visited the original (and huge) Bass Pro Shop/Outdoor World that not only is a nice outdoors gear store, but the building houses 3 different museums on the topics of archery, vintage firearms, and wildlife. The building also housed a live gator exhibit, snapping turtle tank, a restaurant, a snack stand, a drink stand, and many different fish tanks. There was plenty  to explore even if you didn’t need anything from their store.

We also visited the Fantastic Caverns just north of Springfield. While this isn’t the largest cavern I have seen, it was the first one that I have ridden through instead of walking. The tours are actually given via a propane-powered (lower emissions) Jeep and trailer that drives you through the cavern. The tour stops at a number of locations through the cavern and the guide points out features of the cavern. The 1 hour tour was very enjoyable and informative.

The family did a bit of touring up and down Route 66, which winds right through downtown Springfield, and made a few stops at souvenir shops along the way. The kids especially liked the stop at a very large candy store. They also liked stopping at Hurt’s Donuts, a local 24/7 donut shop we had come to love during our time there. Not only did Hurt’s have some really good donuts, but they frequently ran specials to help out around the community and nation. They ran fundraising drives for Harvey victims; and when a local police officer was killed in the line of duty, Hurt’s hosted a 24-hour fundraising drive for the officer’s family raising over $31,000!! It was pretty easy to stand behind this type of philanthropy-oriented business model.

After almost a week of visiting and exploring the Springfield area, the family all piled back into their vehicles and made the trek back to Ohio/Kansas/Minnesota. It was a great visit, especially since we had not seen some of them in a few months or years. Once the family had departed, we quickly switched gears from visiting to packing, preparing to leave Missouri ourselves just 3 days later.