We have been doing a lot of driving lately. From Florida to Ohio to Rhode Island, back to Florida and now to California. I feel like I need a three week nap after all of this! But alas, the reality is that these kiddos are growing fast and they might be grown and gone if I napped for three weeks!

In all honesty thought the trip to California was not as bad or tiresome as I had dreaded. Our goal was to drive approximately 500 miles a day. We arrived in Daytona Beach early early early on a Sunday morning, around 2am but then we lost an hour to the time change that same night. After a few hours of sleep we were up and moving. There was so much to do! I had to completely unload the van (to get our deck box in) and put everything away from our three week stay with relatives. Everything had to be put where it would not move or slide, tied down, or boxed up. Nothing could be left out. We rearranged, rearranged again, and finally had everything sorted out where it should go. I even got all of the Lego bins to fit into our half loft! Neighbors needed to be hugged and hugged again. Tires and lugnuts were checked. Hoses and cables were stowed. We finally rolled out of the campground at 1:30pm but were not really on our way yet. It took us an hour and a half to get the vehicles and trailers weighed while trying to navigate around a large amount of bike week traffic and congestion at the local truck stop. When moving for military one must weigh their possessions before and after the move to prove one actually did move that weight of possessions. This is because the military pays travel expenses based on weight.

The first part of our trip was mostly uneventful. We encountered some heavy rain while still near the east coast. Visibility was heavily compromised. Thankfully the rain only lasted a short time.

I quickly realized that my van was going to be the limiting factor on how frequently we needed to stop. She usually has a range of more than 400 miles with a full tank of fuel but that was cut to less than 200 with the weight and resistance of the loaded box trailer behind her. Still, we made better time than expected and arrived in Texas to visit friends almost a full day before expected. We were able to spend all day Tuesday resting and visiting and enjoying good company!

Wednesday we took a small detour to visit Waco, Texas. We don’t watch a lot of TV, but Fixer Upper is one of our favorites when we do. Unintended, we arrived in Waco the day before Magnolia Market’s big Spring at the Silos event. We were quite worried that we would not be able to find any place to park at all since the place appeared packed, and we had both the RV and box trailer in tow. Thankfully some friendly police officers directed us to a parking area that was mostly an empty field and was only about 4 blocks away, which we were more than happy to walk. We were even able to park in the shade! 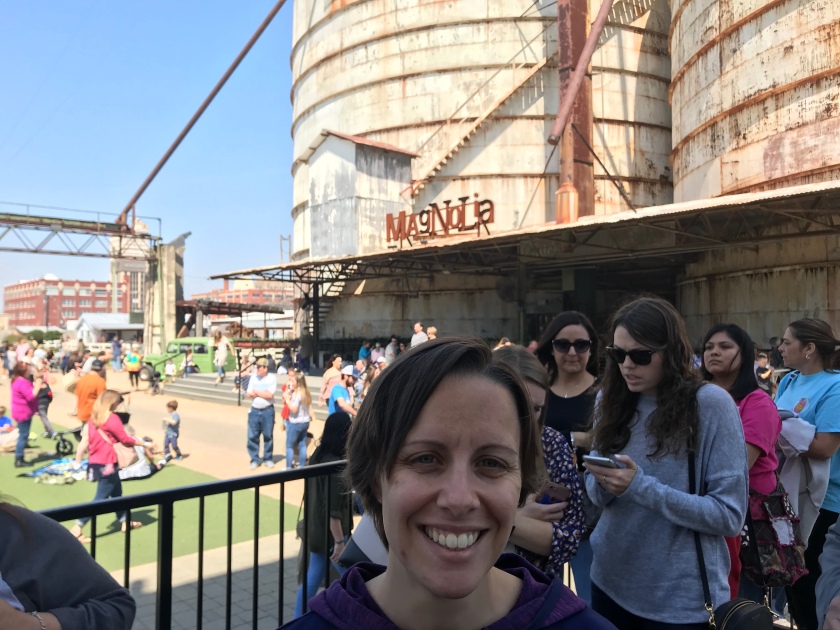 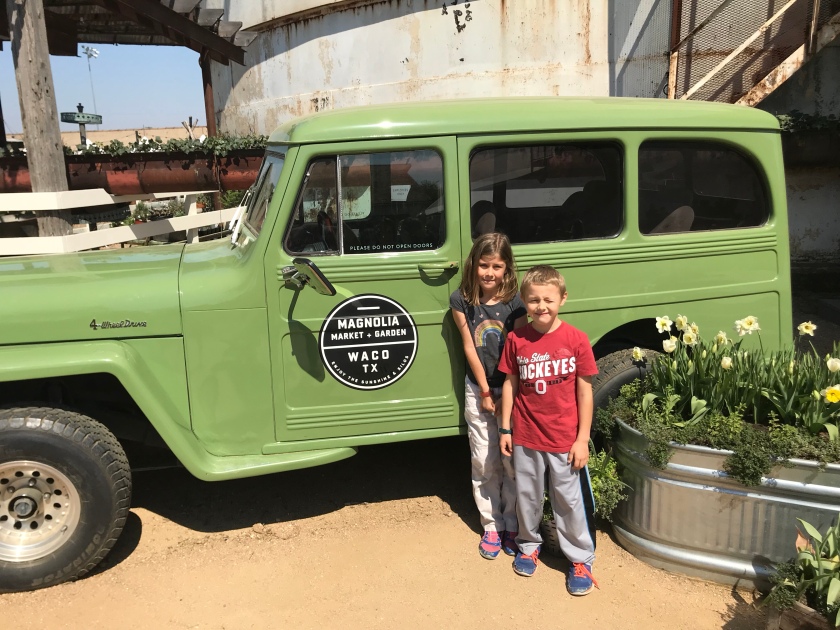 After waiting in line to get in we were able to peruse Magnolia Market. The kids were so excited, jumping and pointing, “Mom that’s just like what we saw on TV!” They really wanted to go into the cupcake shop but we were just not willing to wait in the line that stretched down the entire block. Instead we grabbed some lunch at a couple of food trucks on property and enjoyed eating in Magnolia’s green space. On the way back to the RV we stopped into a pie shop and had some pie for π day. Yum!

After Waco we had a long long drive on smaller highways through low hills of west Texas. As it got on toward evening the landscape was changing to be more desert-like with small scraggly bushes and prickly pear cacti. It brought back fond memories of our two assignments in San Angelo but it wasn’t long before I was reminded that nearly half (or more!) of the vehicles in San Angelo had cattleguards installed, and the reason why. As dusk faded to darkness and we trucked on across the state with blackness all around except for our headlights and the numerous stars, we had to have passed more than 100 dear watchfully munching on vegetation at the edge of the highway in small groups. This part of the drive was quite nerve wracking for me as I tried to see and anticipate which deer might throw itself into my path while I traveled past at 65mph. Only a couple of them jumped toward the road before deciding against it and turning back and I think only two actually did jump out in front of us. One was a narrow miss for Kevin. Finally done running this gauntlet, we found an empty picnic area in which to spend the night.

Thursday was spent finishing out Texas and going through New Mexico and part of Arizona. The van’s transmission was not especially happy with the long up-hills and the beating sun. Visibility was not great either with a large dust storm in New Mexico. The van was quite a bit happier when I started buying higher grade fuel. We stopped this night to squeeze into a packed Arizona picnic area and woke the next morning to an almost empty picnic area surrounded by beautiful scenery, saguaro cacti, and a wonderful sunrise.

Friday was our last day on the road. We were all sore and tired of being in our seats by now. Bug, had he not been restrained by his seatbelt, would have been bouncing off of the walls and ceiling. Little Miss Kicky Feet was getting a diaper rash from having a dirty diaper almost every time we stopped on this last day and the rest of us were just ready to be done. This day was spent driving up and down mountains topping out at around 4,000 feet. The van did well at keeping up with the truck though she did develop a crack in her windshield that grew almost a foot throughout the day. I was surprised it hadn’t happened much sooner with the number of rocks that had been thrown from semi tires and made a direct hit on the windshield. Not to mention the falling ice that was melting off of trees in Rhode Island as we drove under them! Finally though, we made it into San Diego, spent some time getting weighed again and were finally able to go find a campground. We were too tired to really enjoy much that night. At 8pm we felt like it should have been 11 and were sound asleep. Even now 2 weeks later we are still having dinner around 5pm (8pm on the east coast) It is a nice change for us to not be eating dinner after dark!

One thought on “From sea to shining sea”